After spending 2 months in Koh Lanta, I decided to move to the Philippines for 1 month to discover this amazing country. 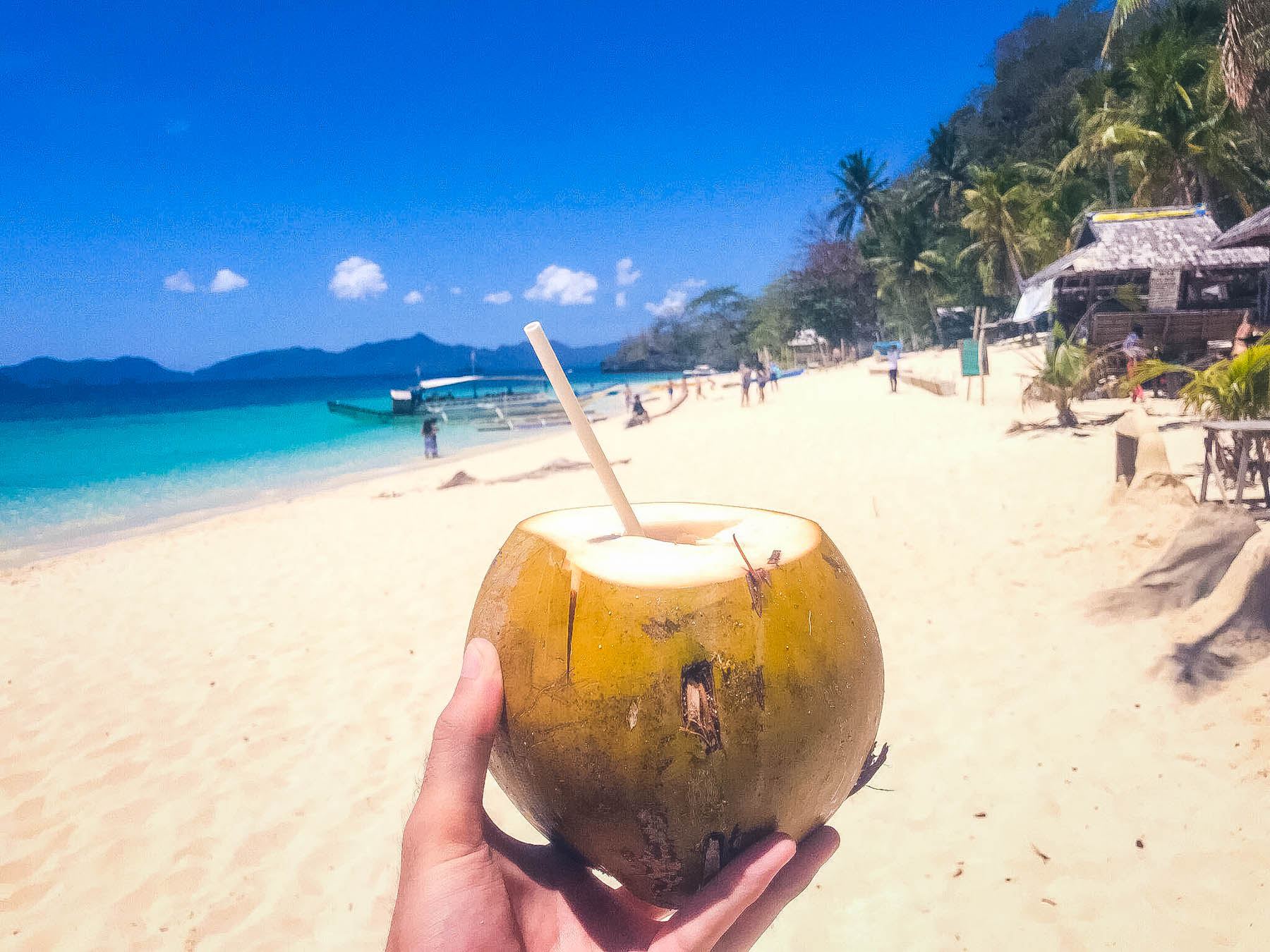 The Philippines is an island country composed of more than 7 000 islands. It’s is known for its incredible crystal clear water, blue lagoon, and white sand beaches.

As a digital nomad, it’s not always the most recommended destination because the internet speed can vary a lot due to the geography of the country.

I’ll explain in this article how I organized myself to have a good balance between work and staying in paradise location.

Here is the tour I did in the Philippines. I spent most of my time in Cebu City (I’ll explain why just later), and just did 2 weekends on paradise places. 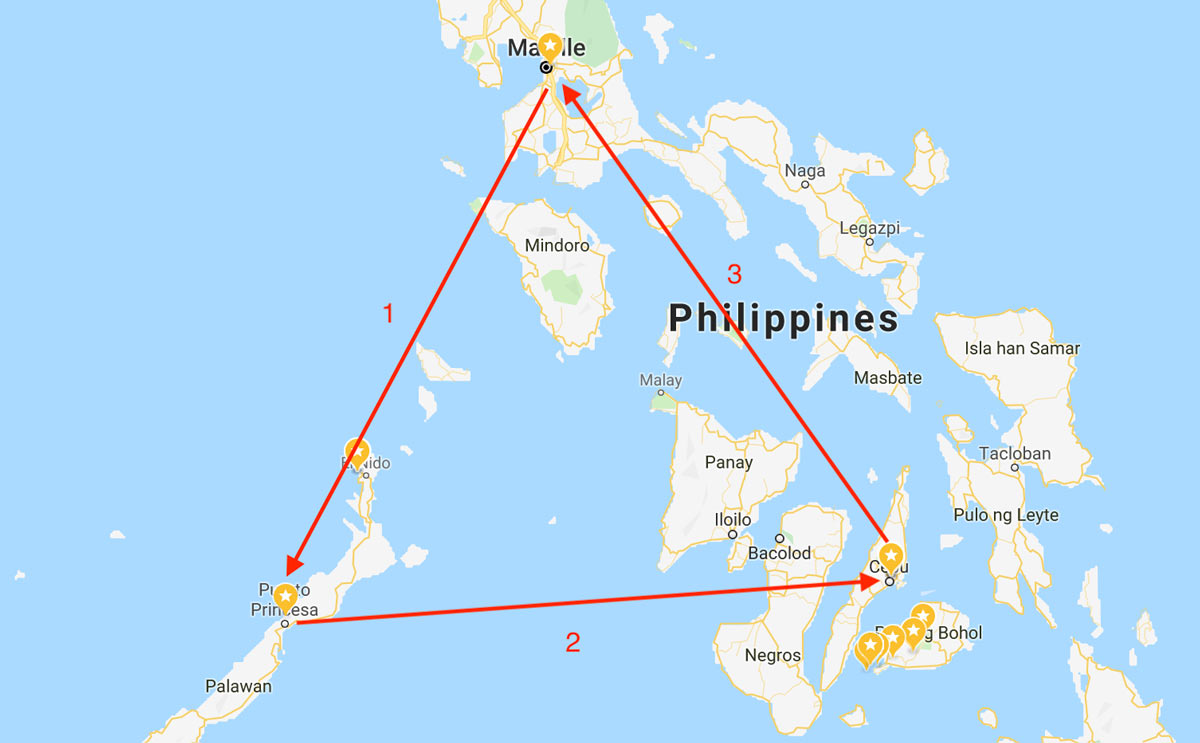 A little word on my digital nomad philosophy

Being digital nomad is totally different from being a traveler.

I’m not in holidays. I’m not looking for moving every 2 days, eating at the airport and waking up at 3 AM to catch a boat. (I do like that, but only when I’m in holidays with my friends, it’s not sustainable on a daily basis).

When I’m in my daily life, I’m looking to find as much stability as possible so I can build a routine and be productive at work.

To achieve that, I stay in general between 2 and 4 months in a country.

This time was a little different because I planned a long time ago to see a friend in India in April, so I decided to stay only 1 month in the Philippines.

Still, in one month I managed to find my routine.

First, a few days in Manila

I landed first in Manila and worked 2 days from there. Manila was quite crowded, but I managed to be productive.

I first worked in an internet cafe full of people playing fortnite (interesting atmosphere 🤔). This was super cheap (50 PHP/0.85€ per hour of internet), but not as professional as I’m used to. Internet speed was really fast. 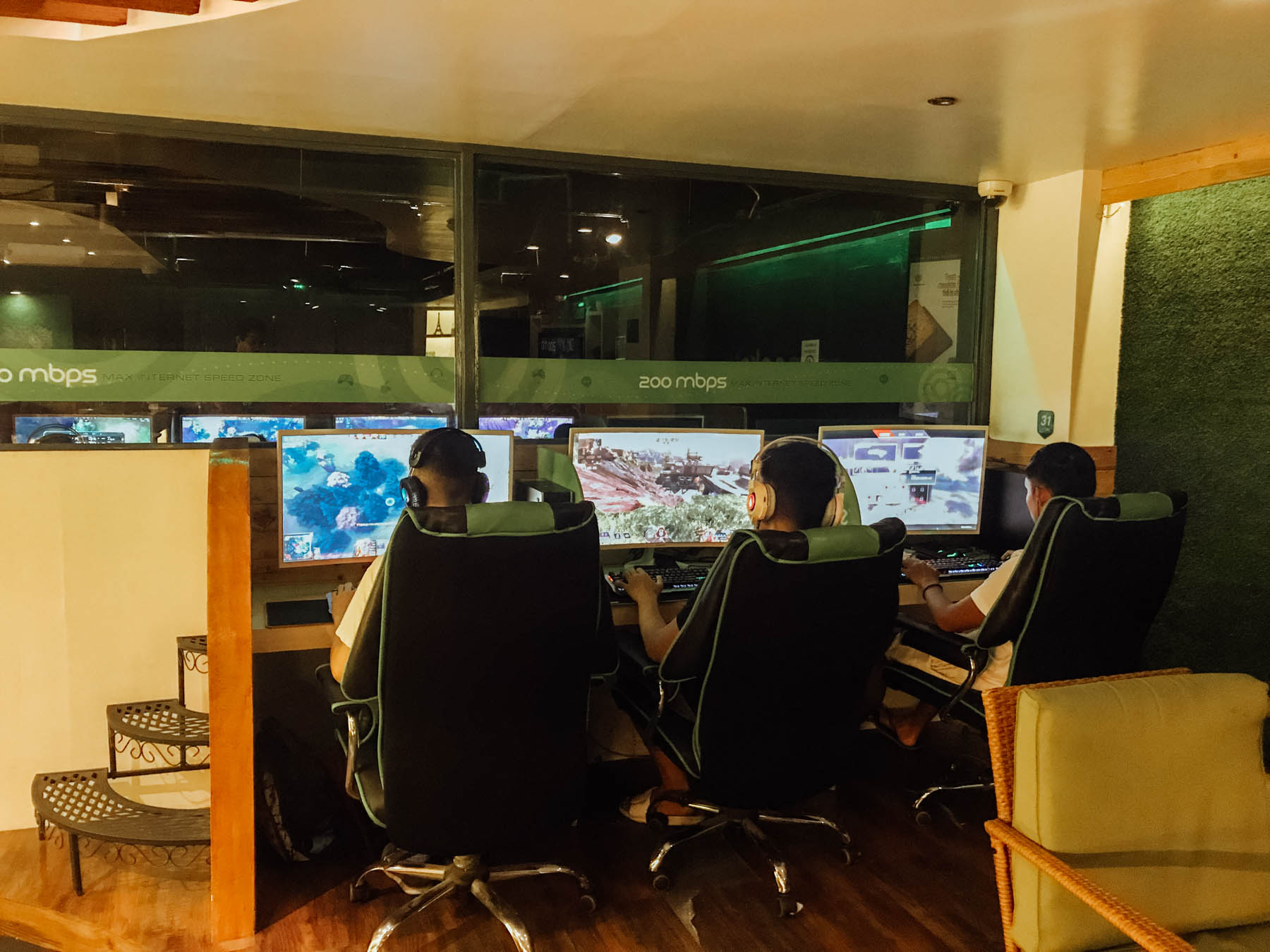 The second day I went to real coworking space, Acceler8. This time the atmosphere was better but prices were a little higher (660 PHP/11.26€ for the day). Internet speed was fast but not as fast as in the gamer cafe. I guess people playing fortnite have higher latency standard than pro 😂

A long weekend in beautiful Palawan

Then, I moved to Palawan for a long weekend. I took a 30€ flight to Puerto Princesa (thanks Cebu Pacific), then a 5 hour bus to El Nido.

There I did the usual snorkelling tour, spent time on the beach and went kayaking. 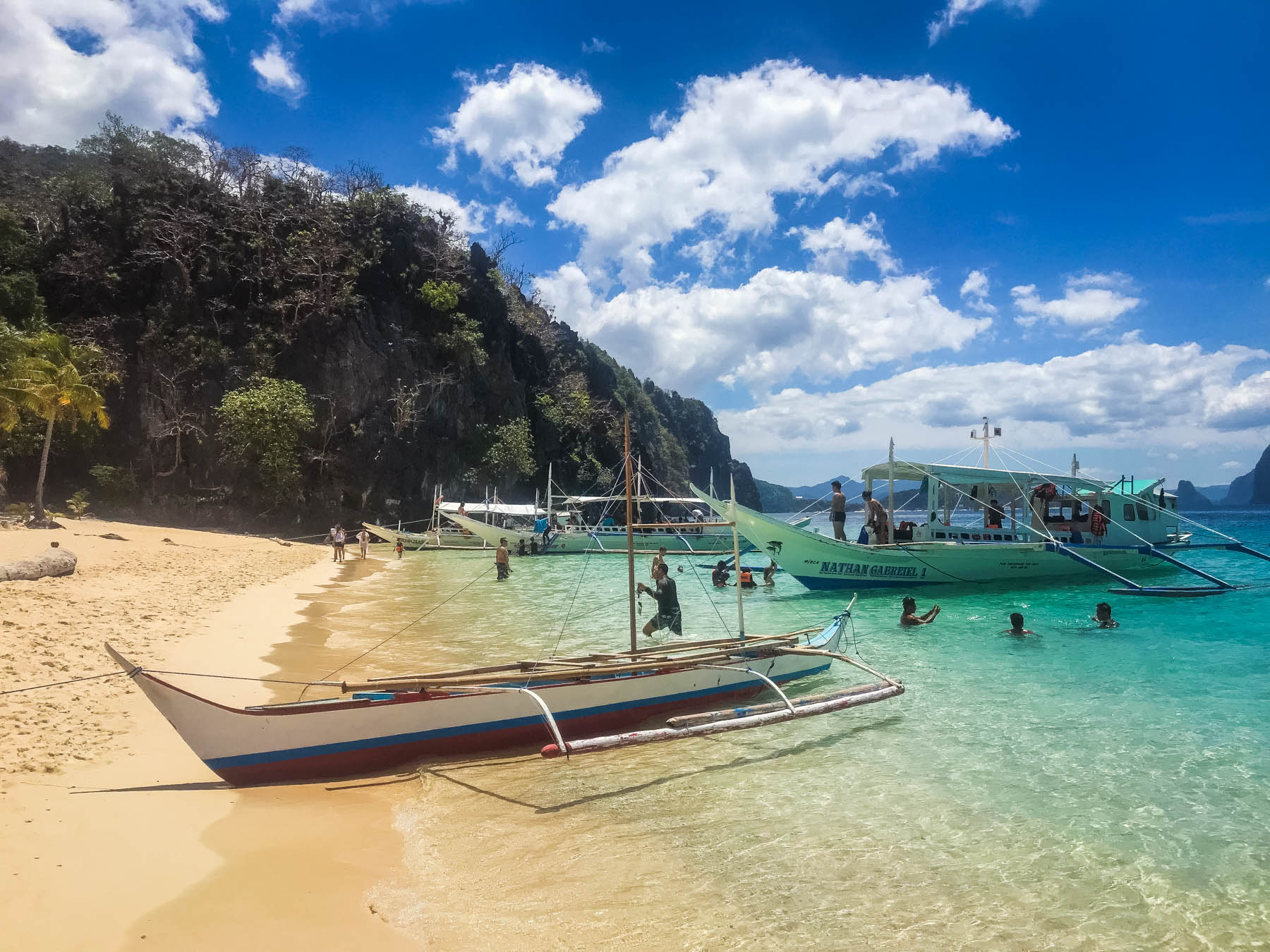 Finally, I took a flight to Cebu City (for 30€ as well), and settled there for the following 3 weeks.

Cebu city is like a smaller Manila. Don’t expect to live in paradise, it’s the stereotype of the big city: lots of cars everywhere, really crowded, western fast-food everywhere, and lots of poverty. Still, the city has everything for you to be productive at work. 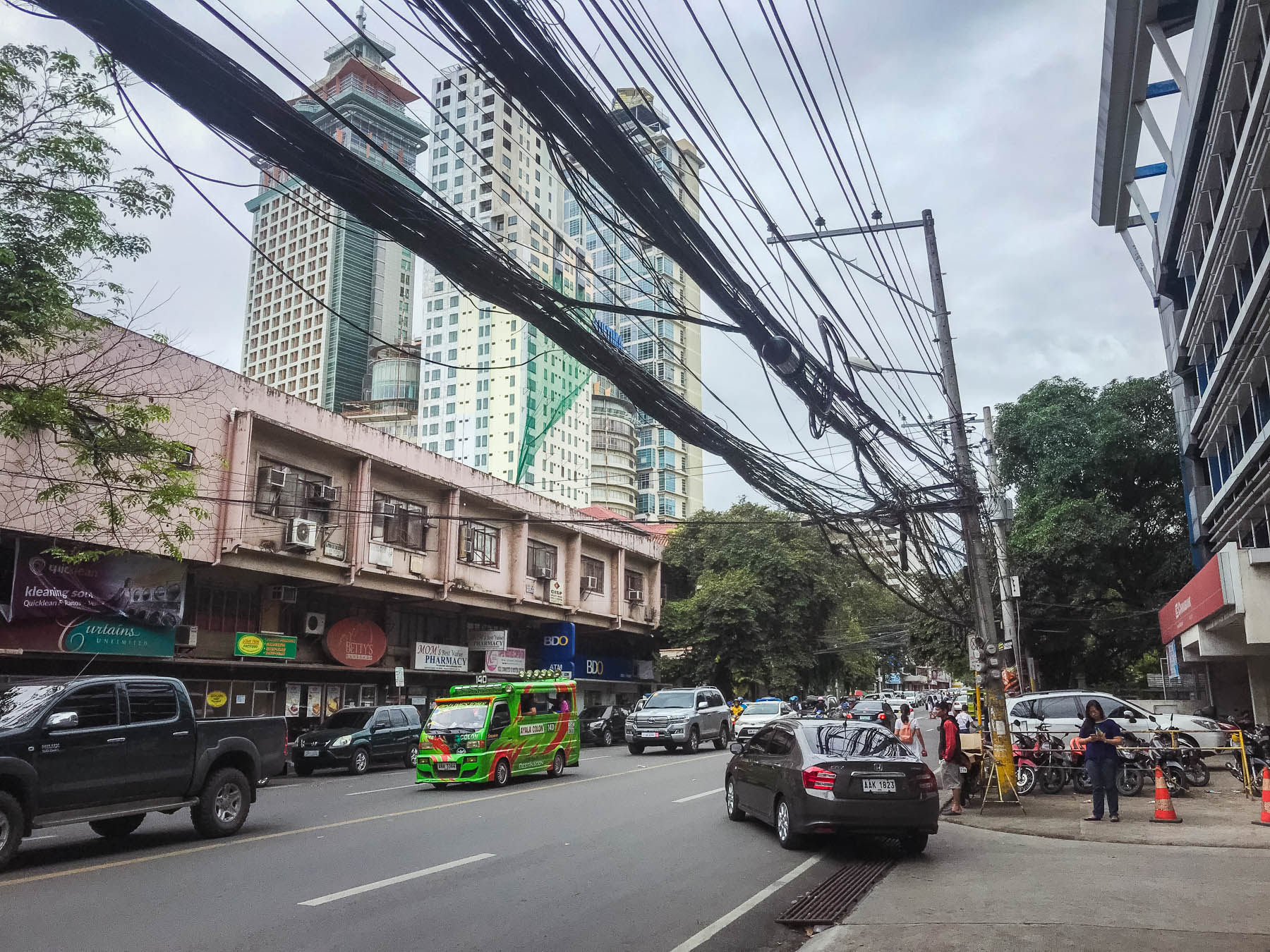 The first days, I just slept in a hostel (6€/night) and worked in a great coworking space which was amazingly cheap.

The space is named Workplace cafe, cost 280 PHP per day (4,78€/day), including a welcome drink, optic fiber, working chair and stays open until 6 AM.

I managed to find a nice apartment in a tower on Airbnb.

But here, considering the fact that it was my apartment + my working place + my gym, it removed costs that I usually pay separately, so 18€/night was in the budget. 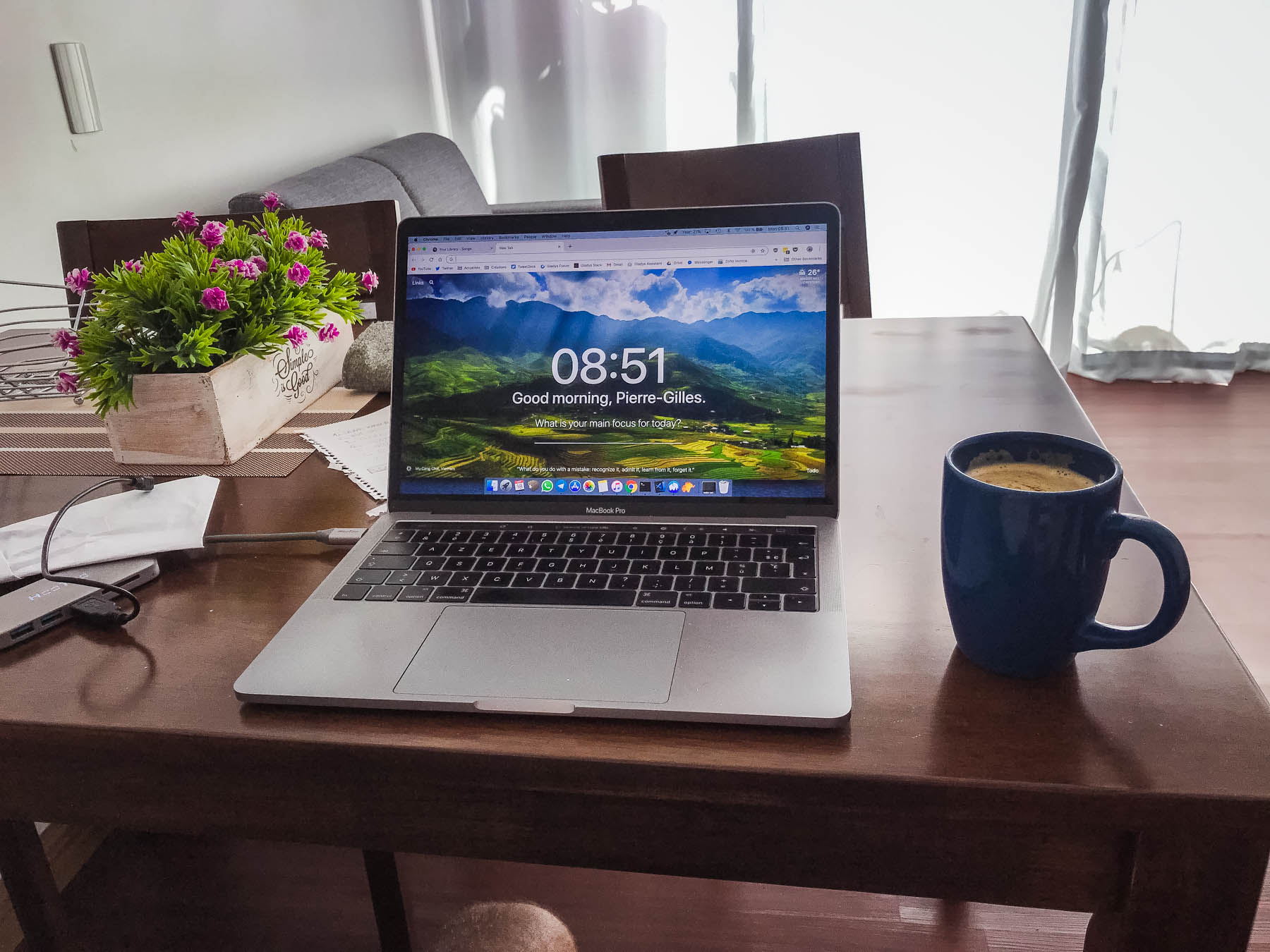 I had a great time in this apartment, but I experienced something that I didn’t experience before: loneliness.

In Cebu City, I didn’t find a nomad community like I experienced in Bali or Koh Lanta. No beach & beers after work, no sunset with the friends from the coworking space. The first coworking space I found was just full of Filipinos student, no nomads.

Maybe that’s just the beginning of the nomad scene in the Philippines. I know some people have been working there for years, but it’s not mainstream yet. Giving the potential of the Philippines, I’m sure it’s going to change in the coming years.

Swimming with the turtles in Bohol

For my last weekend in the Philippines, I went to Bohol. It took 2 hours of boat from Cebu City + 30 min of taxi.

I experienced the same level of paradise as El Nido.

I went on a snorkelling tour to see turtles and drove on a scooter to the famous Chocolate Hills. 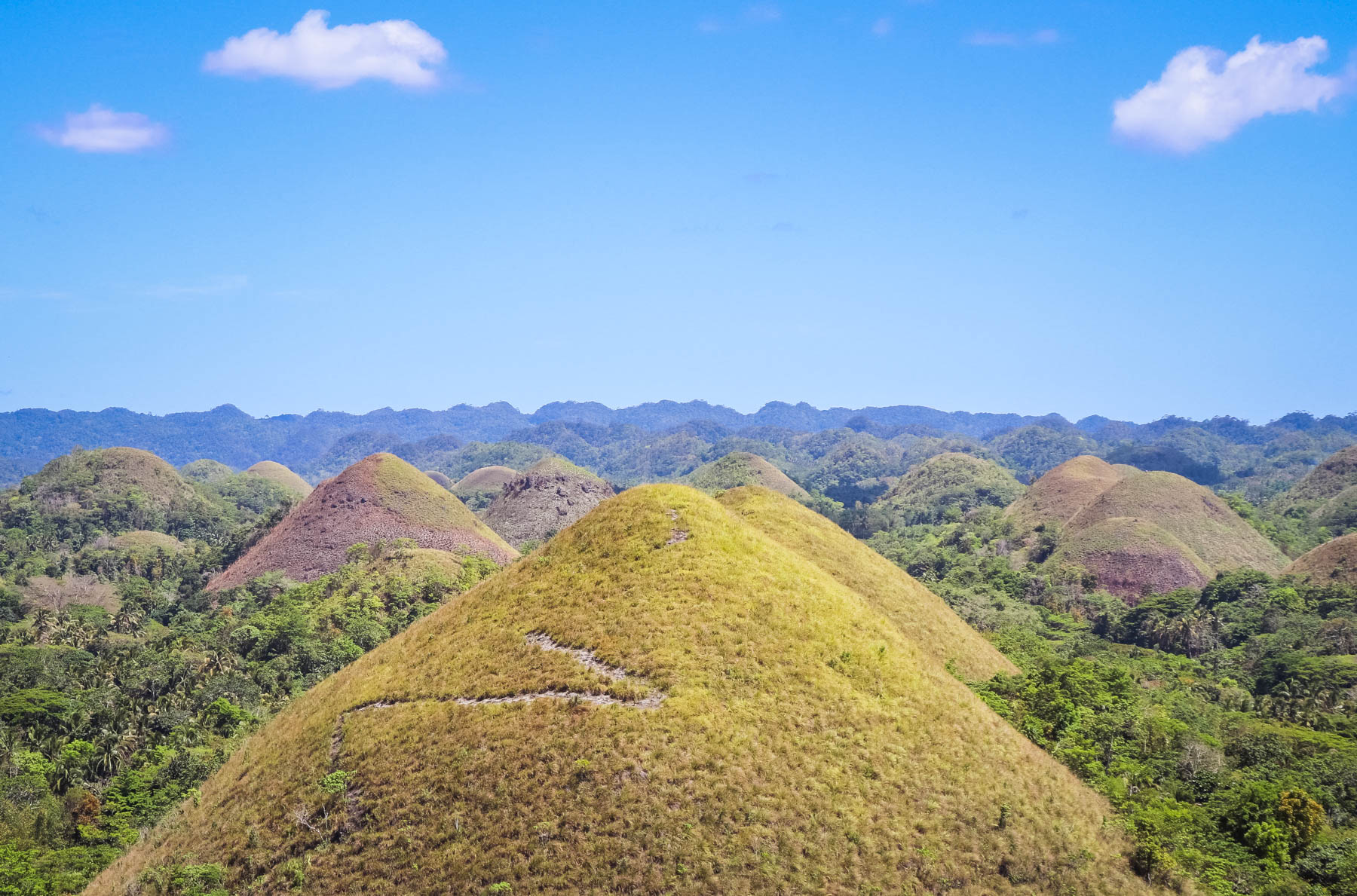 Amazing time swimming with the turtles 🐢 this weekend on Bohol Island, Philippines 🌴

I’m quite balanced on food in the Philippines.

On the one hand, it’s the cheapest food I’ve seen in my entire life. 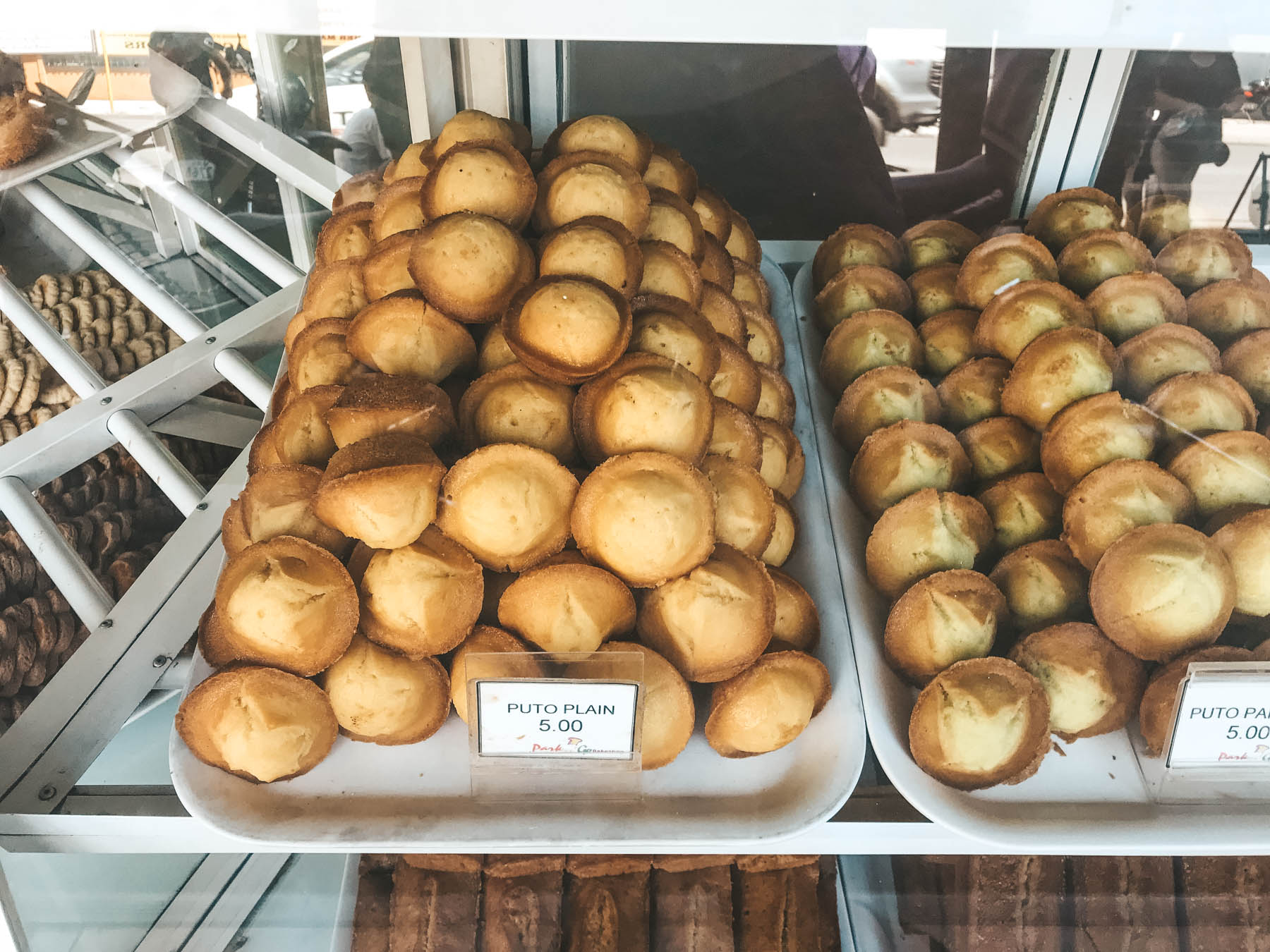 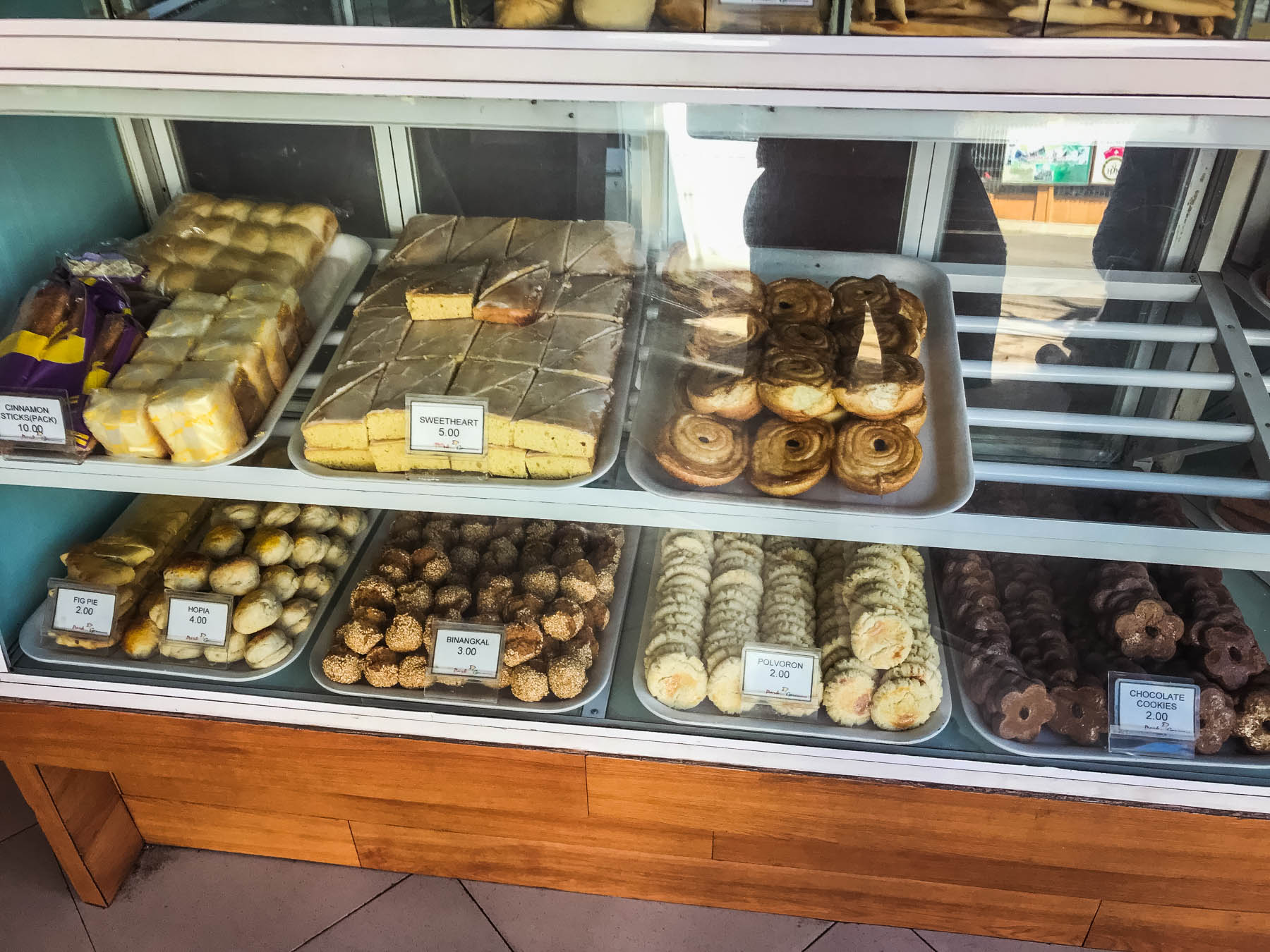 And it’s really good! (Don’t eat too much of them. It’s really sweet 😁) 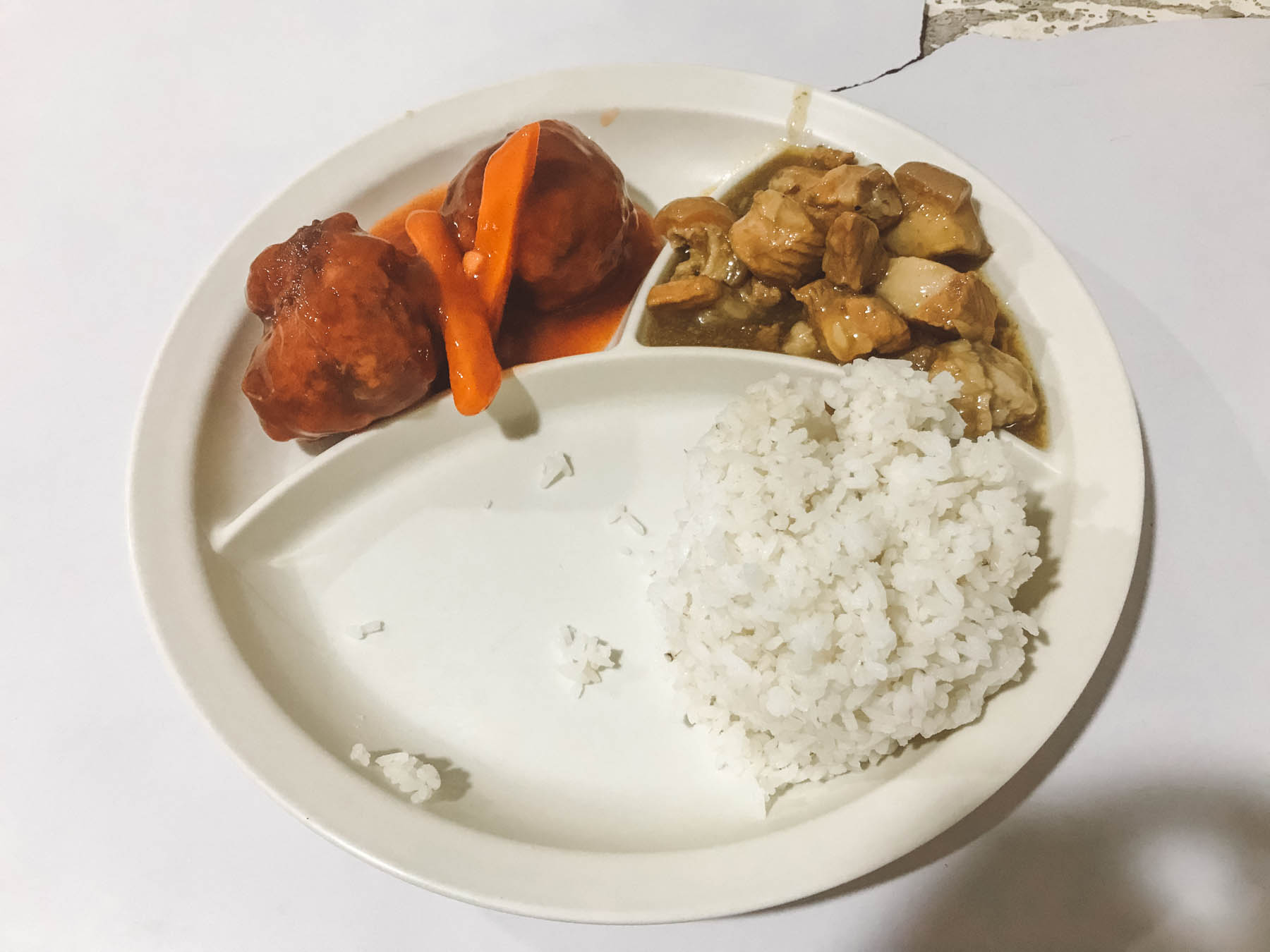 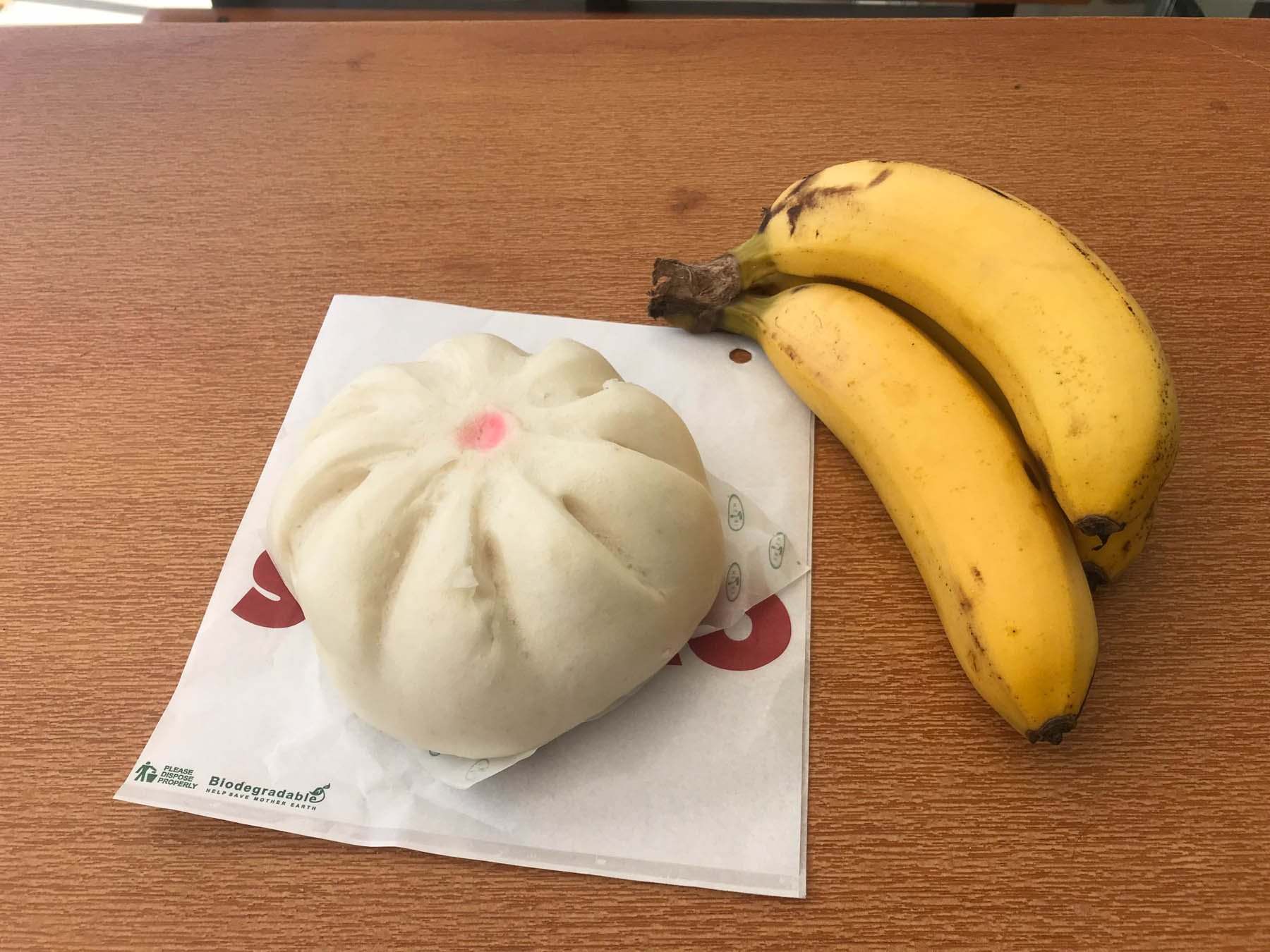 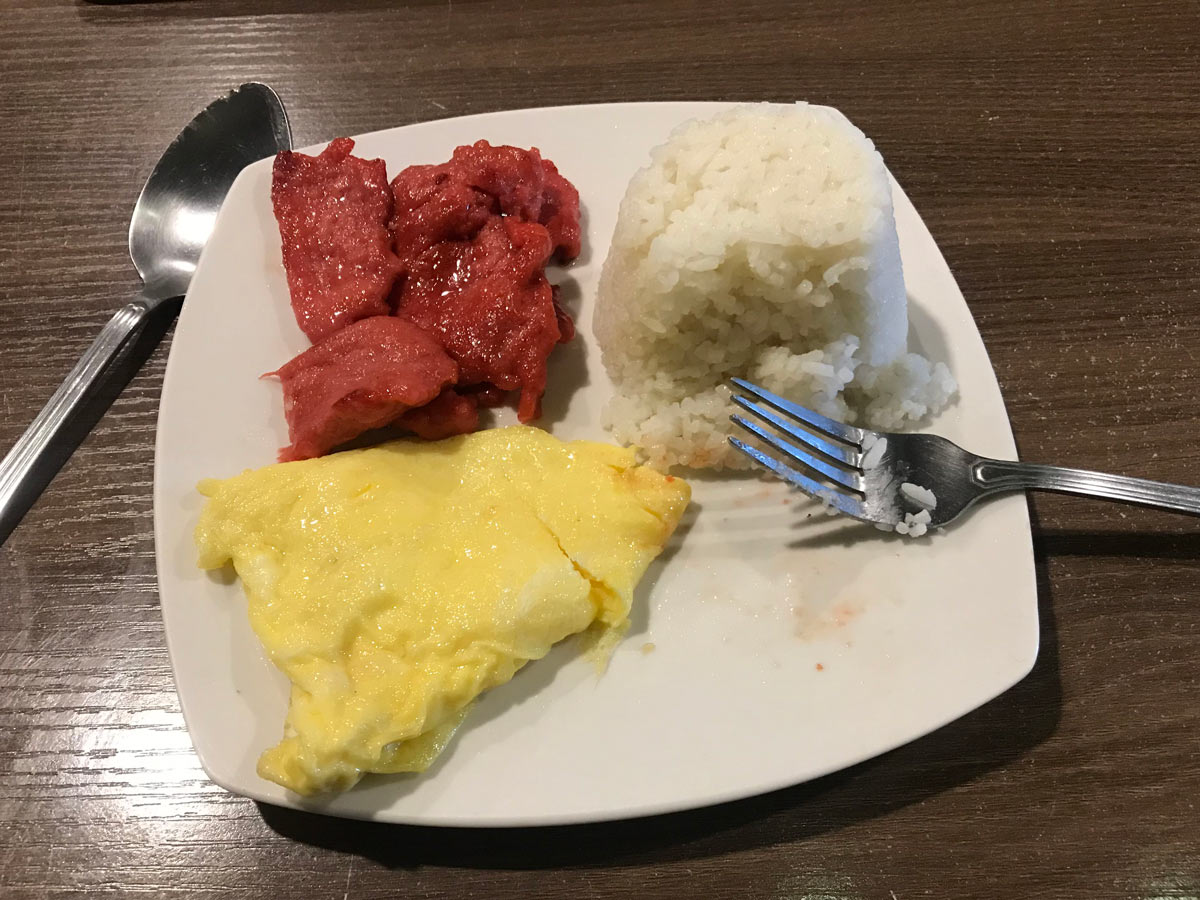 But on the other hand, it’s always the same thing.

I have to say I struggled to eat healthily in the Philippines. I cooked vegetables myself when I was in my apartment, but otherwise it was almost impossible to get healthy food outside. Everything is fried, and they put tons of sugar in everything, way more than in Thailand.

I even finished by eating in an expensive Thai restaurant in Panglao, as I was dying to eat a salad and vegetables 😅

You could say that eating rice is the basis in Asia, but eating just plain white rice without vegetables is not ^^ All countries I’ve been to before have great vegetables on the side of the rice, and in Thailand you have all their great sauce (green curry, coconut milk soup).

The budget side was really easy.

Even when you take into account fancy activities on weekends, Philippines is a really cheap place, cheaper than Thailand.

This is my budget for this month: 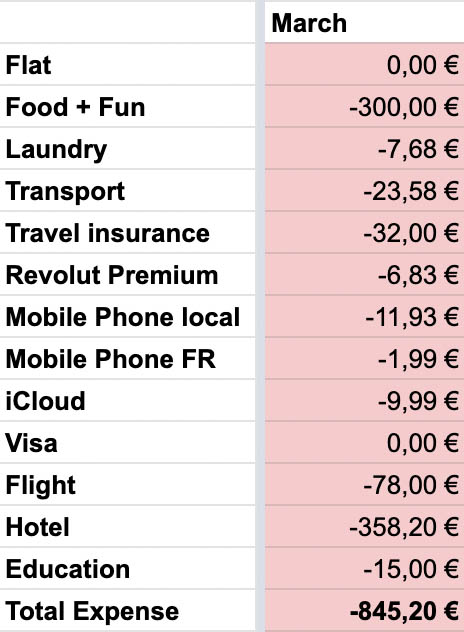 I have to say that I absolutely loved my stay in the Philippines.

I’ve seen the most beautiful beaches I’ve seen in my entire life.

The water is crystal clear on the islands.

I still managed to work hard, and get proper internet.

The only downside of the Philippines is that you can’t have both paradise places and internet at the same time right now. In Koh Lanta, I could work hard during the day and chill in the evening on the beach with a coconut. Same in Bali.

I didn’t manage to have this lifestyle in the Philippines.

But this is just the beginning of the Digital Nomad era in the Philippines, and I’m convinced that in the coming years it’s going to become easier and easier to get the best of both worlds: working close to the beach!

I’m now in India for a month. I’ll write about my experience there in one month.

If you loved this story, you can subscribe to my newsletter here.